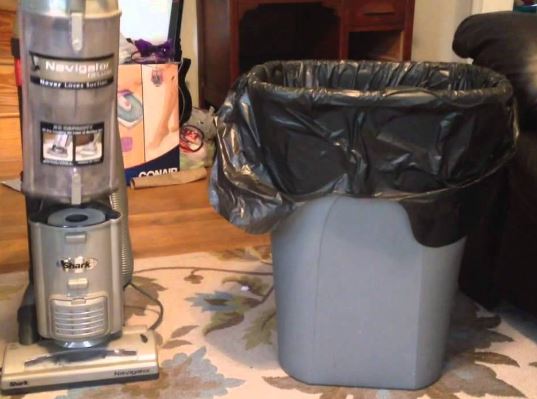 Lost the instructions for your Shark Vacuum cleaner? No worries, we’re here to help!

Part of proper vacuum maintenance is the annoying job of emptying the dirt from the dirt cup. If you’re reading this article then you’re most likely wondering how to do this as fast as possible.

We’ll go over all that in this article, as well as answers to commonly asked questions regarding when to empty the vacuum and more.

When Should You Empty Your Shark Vacuum?

Most of the time the vacuum will have a line near the top that shows the maximum amount of dirt it should hold before it needs to be emptied. This is commonly known as the “max fill” line.

We recommend that you don’t wait until the dirt reaches this line though. It’s better if you empty the cup when the dirt reaches just over the halfway line. This is because when the cup is packed full of dirt it decreases the suction power of your vacuum.

You can also consider emptying the dirt cup anytime you notice that the vacuum is loosing suction or giving off a bad smell.

Washing the dirt cup from time to time is also good.

How to Empty Shark Vacuum Step By Step

The process that you go through will actually vary depending on which model of vacuum you have but here is how you empty a Shark Vacuum.

This might seem too easy, but there are little details that are different for some models. Below we’ll go over how you empty all the specific models of Shark Vacuums. One thing to keep in mind is to always disconnect the power source before you start.

How to empty the Shark Rotator Lift-Away Vacuum

Then hold the cup over the garbage and press the bottom door release button. Then close the dust cup and put it back into the vacuum.

How to Empty the Shark APEX DuoClean Vacuum

Just like with any other vacuum, make sure that it’s turned off and unplugged. Then press the release button located near the wand and the top of the dust cup to separate it.

Once it’s empty, the final step is to place it back into the unit.

Finally, close the dirt cup and put the hand vac back into position.

How to Empty the SharkFLEX Vacuum

How to empty the Shark Navigator Lift-Away Vacuum

The first thing you’ll want to do is to slide the dust cup release tab at the top of the dust cup to separate it. Then hold it over the garbage and empty the dirt.

In order to open the dust cup at the bottom just press the lower release tab. To ensure that all the dirt has been emptied from the cup, open the dirt cup from the top by pressing the upper release tab. Then turn it so it’s upside down over the garbage. When finished, put it back into position.

Although the process for emptying your Shark Vacuum may differ a bit by model, the overall steps are very similar.

The most common issue to run into is not being able to find the release latch. These are normally located either on or next to the dirt cup. However, if you’re still unable to find the dirt cup you can always look at the user manual which will most likely be available online.