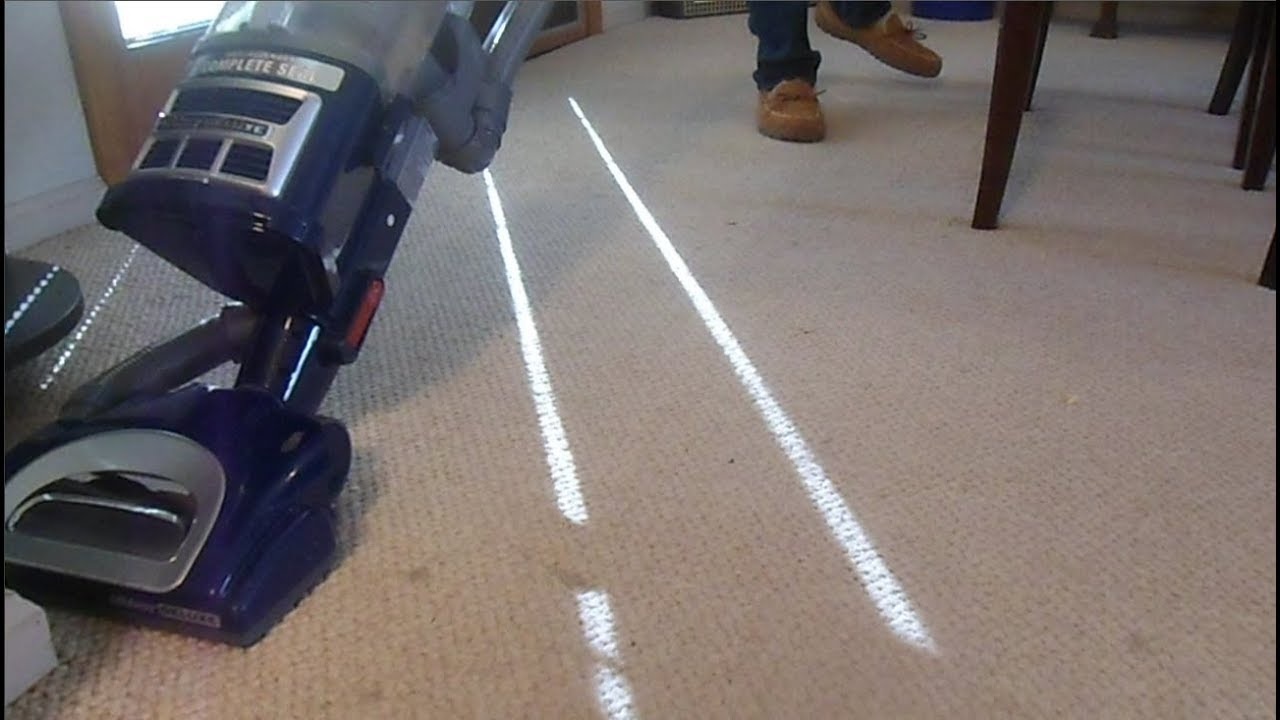 Just looking at Shark’s NV352 and NV360 vacuum cleaners, you might not think there’s much of a difference. But we wanted to compare these near-identical models against each other to see which one came out on top.

We bought both vacuums and ran them through some simple tests to see how they would perform with everyday use.

Read along as we go over each aspect to see which one is the best. We think you will be surprised to learn just how similar they perform in some areas while remaining different.

Each model had its strengths and weaknesses. Which one should you go with? Read on to find out.

Here, we’ll take a quick look at each model’s pros and cons. This will allow you to get a better understanding of what they are capable of, and what kind of features they have. It’s important to note that both vacuums are remarkably similar.

It’s when we ran each model through its paces that we started to see major differences. Read ahead to learn which model performed the best in our testing. While one may have some minor benefits here and there, the ultimate decision was easy for us to make.

Winner: Don’t want to read the full article? Our choice is the Shark NV360. 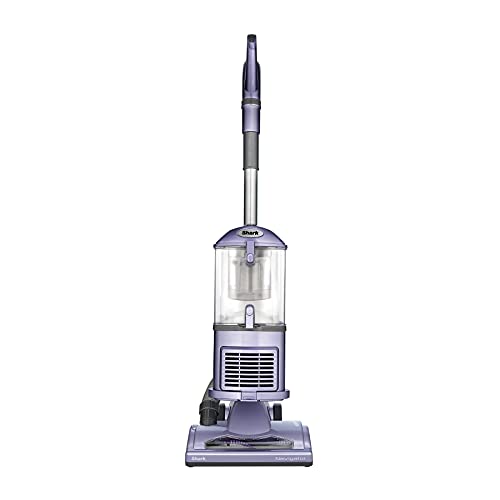 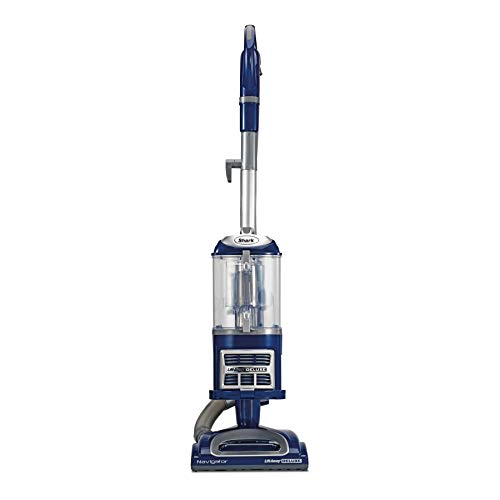 What’s the Difference Between Them?

Now, let’s discuss what makes these two vacuums so different from each other. Aside from color, there are some notable aspects that make one better than the other. A lot of this gets down to personal needs within your home or office.

For us, the difference in attachments helped us decide on a clear winner. However, this might not be as important to you as it was to us. Be sure to read each category carefully. This will help you make the best decision in finding the right vacuum.

This may not seem like much at first glance, but it can be the deciding factor for many buyers. With the NV352, you get a total canister capacity of 1.1 quarts.

The NV360 boasts a slightly larger canister capacity of 1.2 quarts. Each model’s canister pops out for portable vacuuming. This can make a big difference for those buying either model for that specific purpose.

The other aspect of the canister capacity that we feel we must include is its ease of use. The NV360 removed without a hitch. We were able to tote it around and insert it back into its base quite easily.

The NV352 was a different story. We often found ourselves fighting to take it off and reinsert it. The canister never seemed like it wanted to go back in the way it came out. How easy it is to use any tool or appliance is important to us.

If you are looking to buy one of these models based solely on its portability, you will want the one that is easiest to use. This category is a no-brainer. The NV360 takes the win.

The suction power of both the NV352 and NV360 really blew us away. There was only one slight performance issue in both models. We tested the suction on several floor types to see which one did the best job.

Each vacuum was put to the test on hardwood floors, low carpeting, rugs, and thick carpeting. We used it on two different types of thick carpeting. One was normal thickness. But the other was much more so. Each surface was adequately cleaned except for the thickest areas of carpet.

Hardwood floors are cleaned exceptionally well, down to the tiny grooves. It only took a couple of passes to cover a clean kitchen floor. We then moved on to the low carpeted area.

We had no trouble here, either. After a single pass, our floor looked to be spotless. It was nice to not have to make several passes over this floor. It often gathers hair due to heavy pet traffic.

Then came the ultimate test: thick carpeting. The traditional thick carpet looked to be clean after only a couple of passes. So we took it to the next room that has the thickest carpet in the house. This is where things fell apart in our cleanliness test.

As soon as both vacuums’ rollers hit that thick carpeting, it was like we hit a brick wall. The rollers immediately stopped rotating. After a few more attempts, we became fearful that we would damage the vacuums or burn out a motor.

It must be noted that this carpeting isn’t very popular and is VERY thick. We only used it to test the mettle of each model. As far as other surfaces go, we were quite pleased with the outcome. From what we could tell, both vacuums performed about the same, with a slight advantage going to the NV360.

On the outside, both the NV352 and NV360 look mighty similar. But where they are different lies in the attachments. Let’s look at each model’s accessories to help you decide which one will best suit your home’s needs.

The Shark NV352 comes packed with a brush tool. We found this to be especially useful on stairs and some furniture. You use the brush to help you pick up debris that the hose normally can’t get.

Then there’s the 5-inch crevice attachment. This is also great on stairs, as it gets in those pesky corners that the round hose struggles with. If you’re wanting to sweep out your vehicle, you’ll find this tool useful for getting into the fabric of seats and other cracks.

The larger 24-inch attachment comes in handy when you need to get in between seats. Back in the house, you’ll find it is helpful for getting cobwebs off of your ceiling and other hard-to-reach areas.

Lastly, there’s the ever-handy power brush. If you have pets, you know all too well how useful this attachment can be. It picks up hair much better than a standard brush attachment. This is thanks to the power brush’s own independent roller.

It rotates upon adapting it to your hose, picking up troublesome hair at a much finer rate. Since it’s quite small, you can use this on carpeted stairs and furniture fabric. It’s a great way to get your sofa and recliner free of pet hair and other debris.

With the NV360, you get this same handy power brush. It performs just the same as its NV352 counterpart.

You also get a 5.5-inch crevice attachment to get deep into grooves in your hardwood floors. It’s also perfect for getting between couch cushions.

The included duct brush attachment lets you get dust and cobwebs that form over the ducts in your home or office.

Then there’s the extendable wand. This makes it easy for you to get under furniture like your sofa or bed. It takes the strain off of you, requiring you to do much less bending.

When it came time to pick a winner, we were torn. Each attachment has its place. But it largely depends on the individual as to which one will be more useful. In the end, though, we had to give this category to the NV360.

Both vacuums are priced exactly the same at well under $200. You would think this would be a clear tie. But for the money, you get attachments that are a slightly better value in one model. For this reason alone, we have to give this category to the Shark NV360.

The included wand gives you greater reach, resulting in a lot less work. To many, that is worth its weight in gold.

The main feature that makes both of these Sharks so handy is the portable canister. This allows removing only the canister portion of the vacuum. Since the hoses remain attached, you can easily carry it around as you sweep stairs and other notably pesky places.

Instead of lugging around the entire vacuum unit, you’ll have a much lighter and easier time cleaning. This is especially useful when it comes time to clean out your vehicle. You just simply pop out the canister and hold it by the handle.

Each vacuum’s canister weighs a little over 7 pounds. Although the NV352 felt slightly lighter than the NV360. This is just about the same weight as many cordless stick vacuums.

It’s actually over a pound lighter than the popular Shark IONFlex. And thanks to the flexible hose, you actually get greater versatility than stick vacuums.

We found it to be a cinch to haul each model’s canister around with us as we tested it out. It really does make all the difference when sweeping steps. We had no trouble taking it with us wherever we went.

In the end, it came down to ergonomics. We felt that the NV360 has a slightly more comfortable design. It was easier for us to tackle stairways and when sweeping out our vehicles.

Both the NV352 and NV360 have a powerful swiveling head. This takes the majority of the strain off your body thanks to it doing most of the work. It has great range and can swivel in either direction.

This dynamic steering makes it easy to get around obstacles and furniture. You’ll find that you have much more control compared to other vacuums with stationary heads. We would like to have seen an LED headlight on both units. But alas, neither vacuum has this handy feature.

In testing out each unit, we felt that the NV360 swiveled slightly better than the NV352. The range seemed to be about the same, but the motion just felt better on the former.

You will find that both the NV352 and NV360 come equipped with outstanding filtration systems. Each model has an anti-allergen complete seal. You also get a HEPA filter to ensure dust and allergens are kept to a minimum in your home.

You get plenty to work with in each vacuum. Both come with two filters, the HEPA filter, as well as a foam filter. What’s great about the foam filter is that you can wash it over and over for extended use.

We had no trouble cleaning and replacing filters on either vacuum model. It’s a pretty quick and painless process that requires very little maintenance.

While both vacuums appear to be identical, the NV352 weighs slightly less. It clocks in at 12.5 pounds, while the NV360 weighs 13 pounds.

Half a pound may not seem like much to most people. But for those who have trouble lifting, it can make all the difference. In our testing, we felt that both vacuums performed about the same in the weight department.

You can tell a minor difference between the two, but it’s negligible. For those who need their tools to be as light as possible, we have to give the edge to the NV352.

In our Shark NV360 vs Shark NV352 comparison, both vacuums performed well and were a blast to use. We especially liked the ability to take the canister with us for some portable cleaning. Both models are lightweight and a breeze to use in any capacity.

But in the end, the Shark NV360 had a bit better performance thanks to its ergonomic design and better attachments. Sure, it’s slightly heavier than the NV352. But we don’t think it’s enough to make much of a difference in the long run.